Within the project SOCIETIES Support Of CSOs In Empowering Technical Skills, Inclusion of people with disabilities and EU standards in South East Europe, Caritas Serbia is looking for an external Selection Committee for evaluating received project proposals in the framework of Sub-granting monitoring and evaluation activity of the project SOCIETIES.

More information in the attachment below:

Caritas Serbia signed a Memorandum of Understanding with the Ministry of Labor, Employment, Veteran and Social Affairs

President of Caritas Serbia and Belgrade Archbishop Msgr. Stanislav Hocevar and the Minister of Labor, Employment, Veteran and Social Affairs Aleksandar Vulin signed a Memorandum of understanding, on assistance to refugees and migrants, on the 3rd of March 2017. The Ambassador of Germany to Serbia Axel Dittmann was also present to the event.

Thanks to the support of different donors since September 2015 till December 2016 Caritas in Serbia has implemented projects of assistance to refugees and migrants, of the total value of 2,6 million Euro, from which 1,5 million was a donation of the German Ministry of Foreign Affairs. Parallel to this, due to the difficult economic situation in the country, assistance was provided also to the local poor population, in food vouchers, assistance to farmers from rural areas, wheelchairs and strollers and equipment for the social and health institutions. The total value of the assistance to local population was 170.000 euros, from which 98.000 was a donation of the German Ministry of Foreign Affairs.
The signing of the MoU was also a chance to formalise the assistance to local population, provided with the funding of the German Ministry of Foreign Affairs, which was directed to helping mostly local social and health institutions, in Belgrade, Sid and Subotica, cities that are facing the challenges of the refugee crisis. With this donation it was possible to help over 15 institutions, including the Clinical Center of Serbia, Clinical Hospital Center Zvezdara, Institute for Mother and Child, Health centers Novi Beograd, Vozdovac, Zemun and Sid. 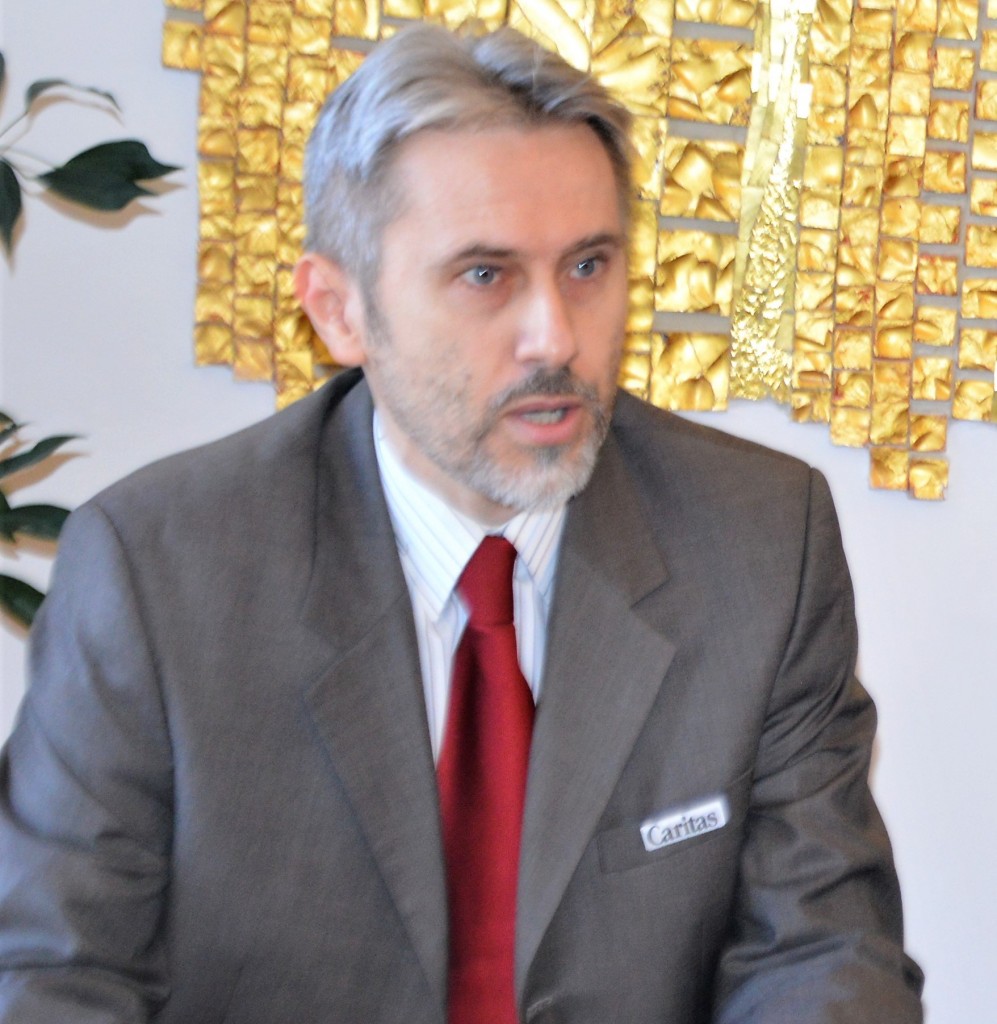 The national coordinator of Caritas Serbia Darko Tot pointed out that the cooperation between the Ministry and Caritas is perennial and continuous in many areas of social protection.
«Within this cooperation a Memorandum of Understanding was already signed in the area of home care of elderly. The work of Caritas in this area was also financed by the Government of Germany and thanks to this cooperation it was possible to help hundreds of elderly people, in various municipalities of Serbia, that had a chance to be visited and supported by Caritas mobile teams. In this moment the cooperation between the Ministry and Caritas is especially intensive in the field of assistance to refugees and migrants, which are going through or staying in Serbia. Today Caritas is present and working in more than 50% of all the refugee centers in Serbia, in cooperation with the competent Ministry and the Commissariat for the refugees», said Darko Tot. 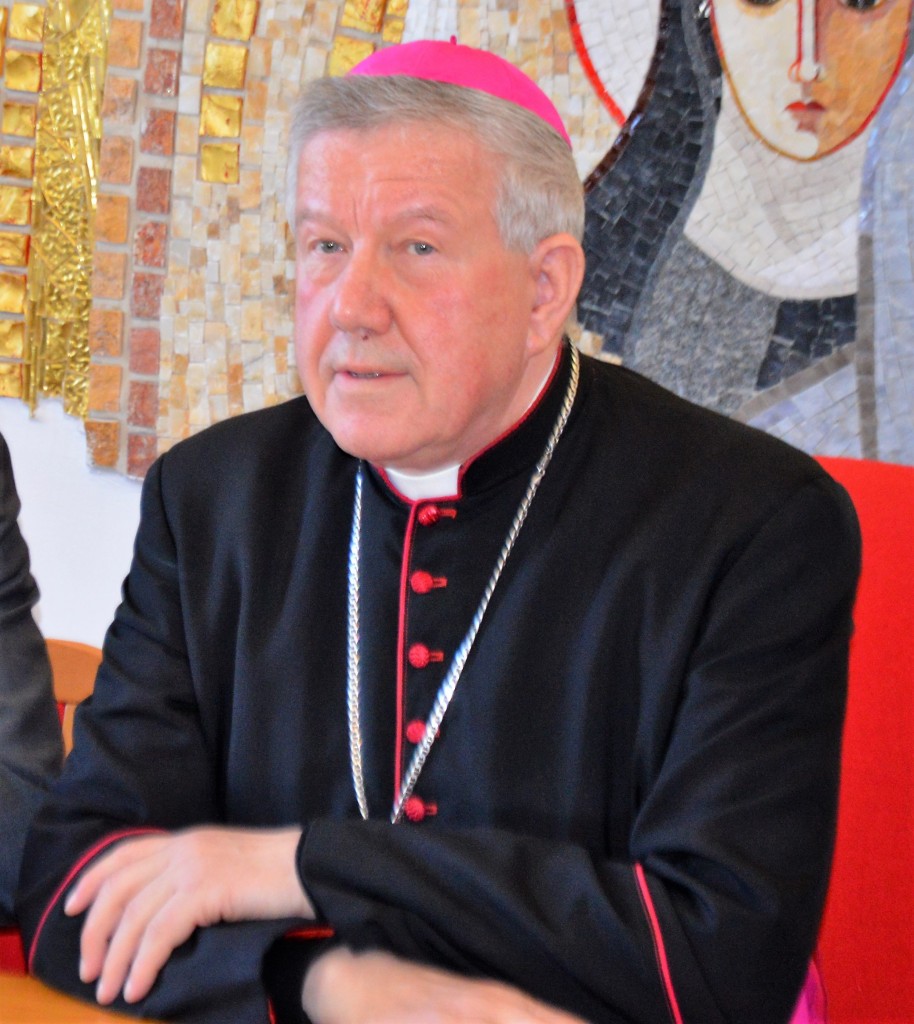 President of Caritas Serbia and Belgrade Archbishop Msgr. Stanislav Hocevar said that signing this Memorandum is a confirmation of the collaboration on the field of assistance to refugees and migrants so far.
«On this field there is a great need for protection of human dignity, dignity of every human being, social justice and promotion of worldwide peace. The phenomena of migrants is showing all the problem of today’s historical moment on a global level. I’m very glad that we can, with the continuous support of the German Ministry of Foreign Affairs, help also our local poor population, especially through services in different health and social institutions in Serbia. The sense, power and strength of our Caritas is to promote cooperation in favor of concrete persons and human beings. I express the hope that this cooperation will always be bigger», pointed out Msgr. Hocevar. 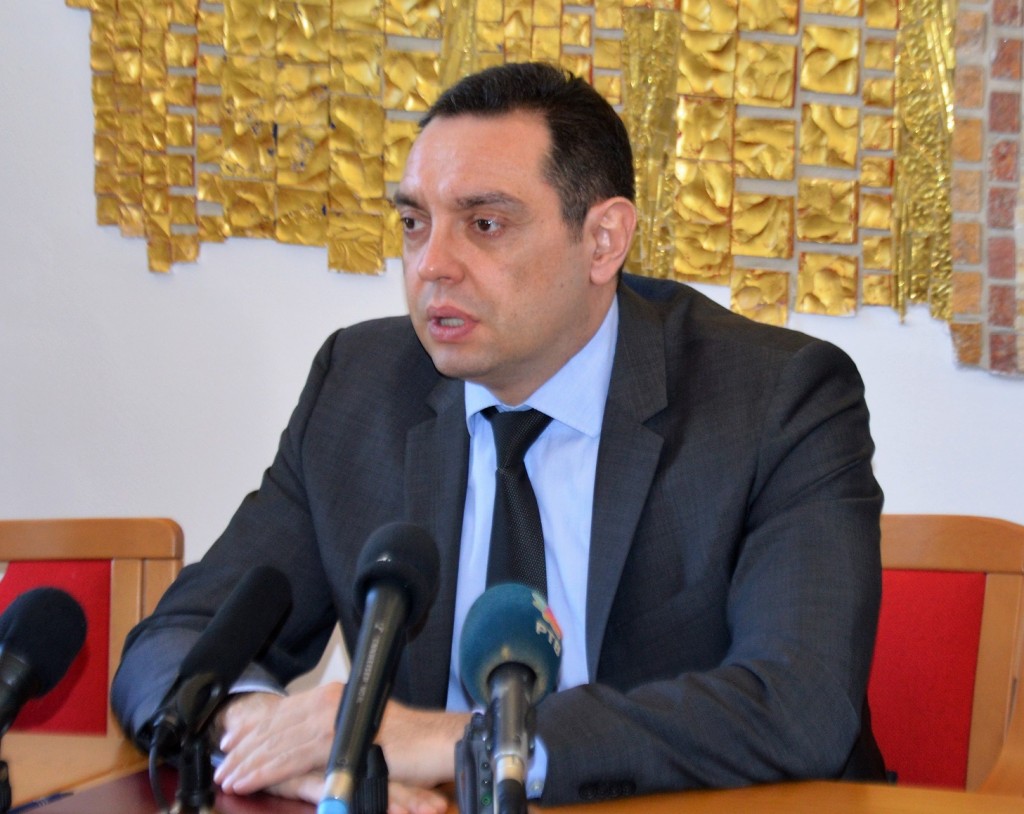 The minister of Labor, Employment, Veteran and Social Affairs Aleksandar Vulin first thanked Archbishop Hocevar on the «personal engagement, great support and help, that Caritas was selflessly giving not only to migrants and refugees, but to all vulnerable human beings it could reach.
I want to thank exactly for this approach of Caritas», pointed out Minister Vulin.

«Caritas is an organization that we collaborate with, that we share common values and goals with. We both understand clearly that every human being must be threaten as a human being, that it’s necessary to respect its dignity, its right to life and no matter the problem it’s facing, that every human being deserves support. With Caritas we’ve been doing this for many years and this way we will only improve our collaboration. I want to thank for the previous year, in which Caritas provided and spent 2,6 million Euro and of that a special gratitude goes to the German Ministry of Foreign Affairs, which provided 1,5 million Euro. This money helped the migrants, but this money also helped the citizens of Serbia. Every activity we do is directed towards our citizens, who are taking care that the migrants are accepted, received and that they feel like dignified human beings. Our citizens should understand that when we are taking care of migrants we are also taking care of them», pointed out Minister Vulin. 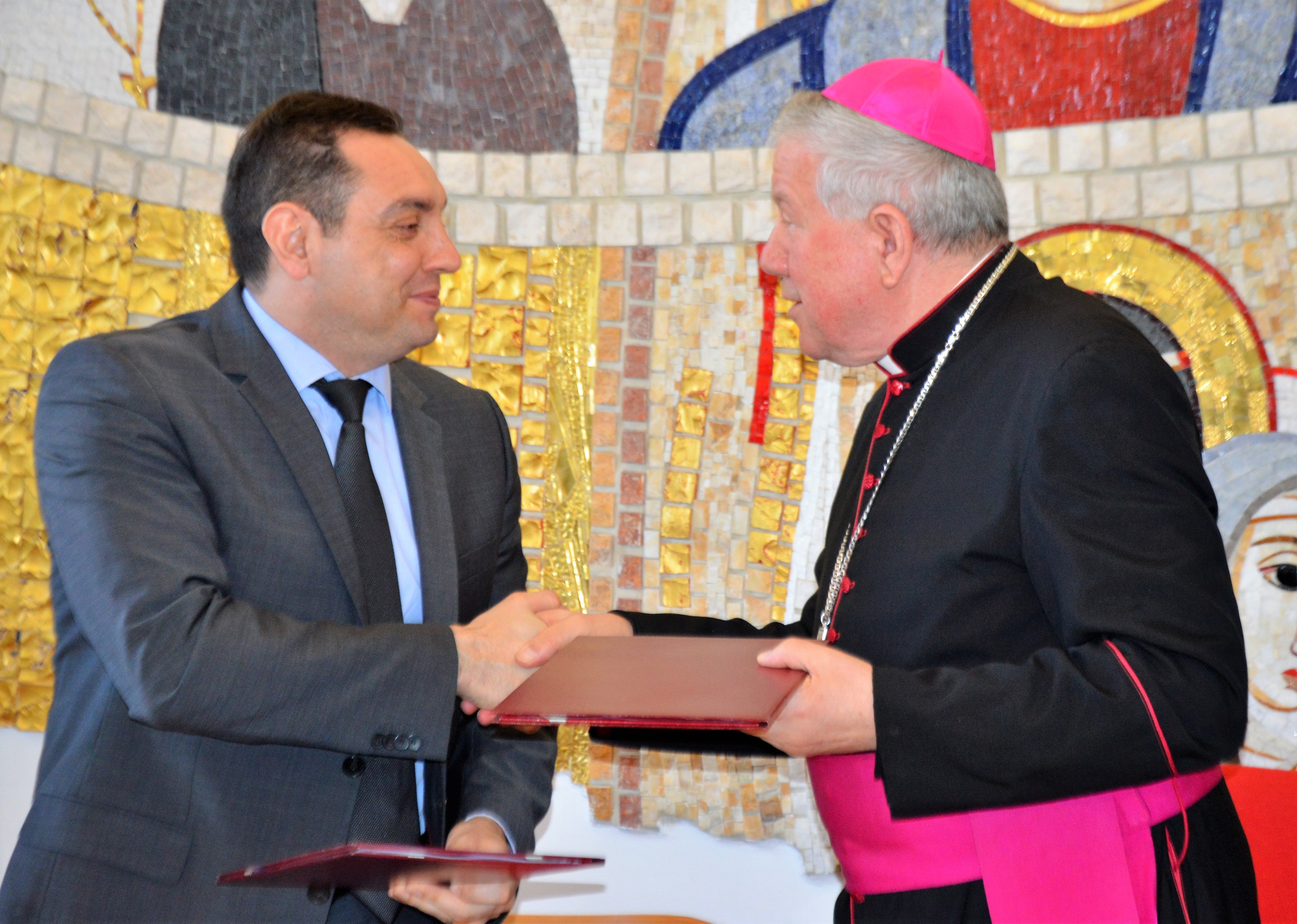 When Caritas started the distribution of humanitarian assistance in the camps of Kanjiza and Subotica, other than the representatives of Caritas, on the field was also present his Excellency Ambassador of Germany Axel Dittmann, giving his personal support and the support of the embassy to this process. This support has been lasting for 18 months now and thanks to the support and understanding of the German Embassy in Belgrade, a significant assistance was provided also for the citizens of Serbia, in medical equipment, pointed out Darko Tot. 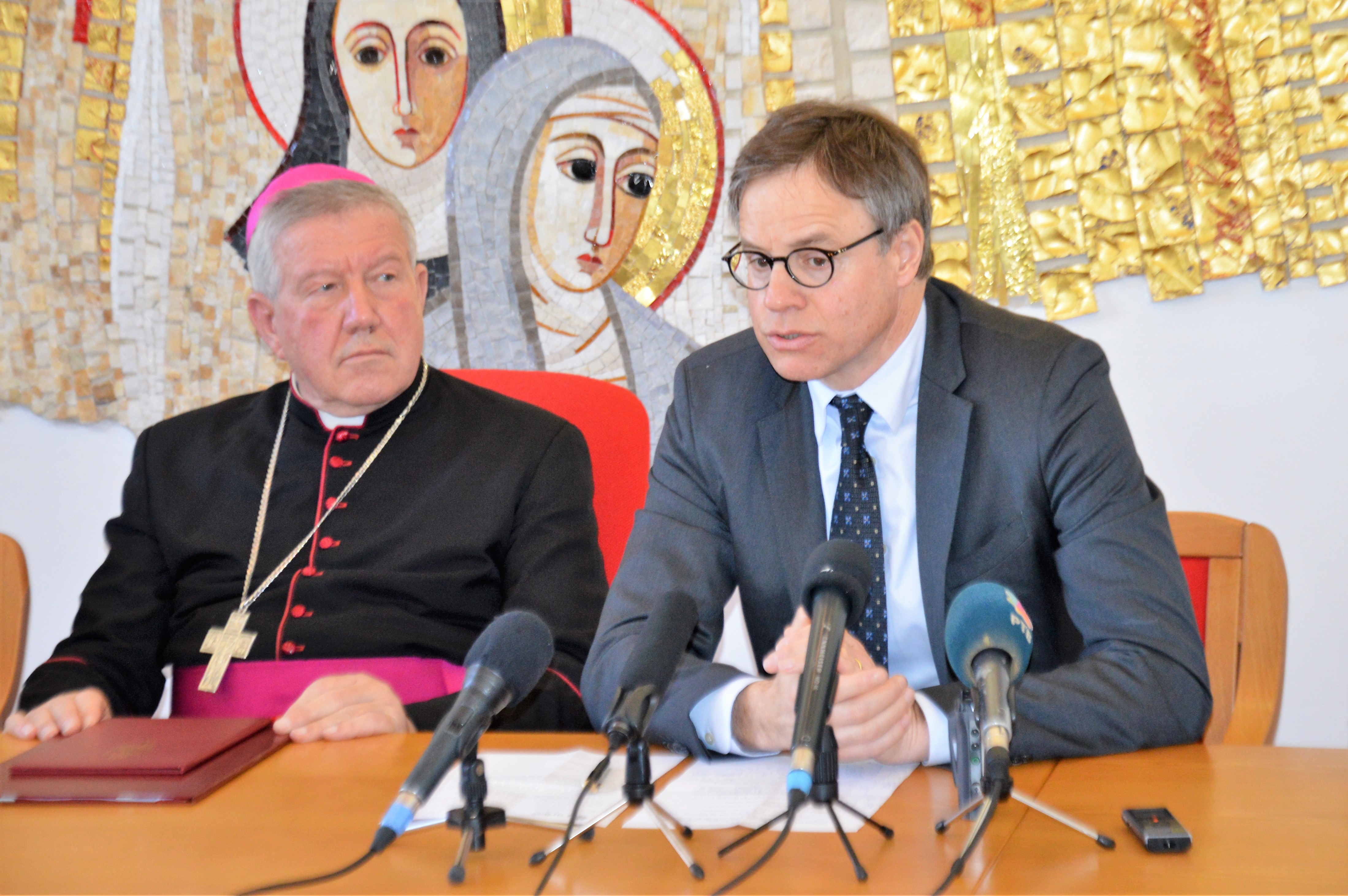 In his speech the Ambassador of Germany to Serbia Axel Dittmann said that the refugee and migrant crisis is a challenge for all, mostly in Serbia. He thanked for the human and responsible approach, that the Government of Serbia has shown, as well as for the support, open and friendly approach, that the citizens of Serbia have shown. He also thanked the archbishop and Caritas for the important projects of the German Foreign Ministry that are being implemented.
«For me it’s a great honor that I can be present on the signing of the Memorandum of understanding between the Government of Serbia and Caritas and I want to point out that we will continue helping and supporting», said the Ambassador Axel Dittmann. 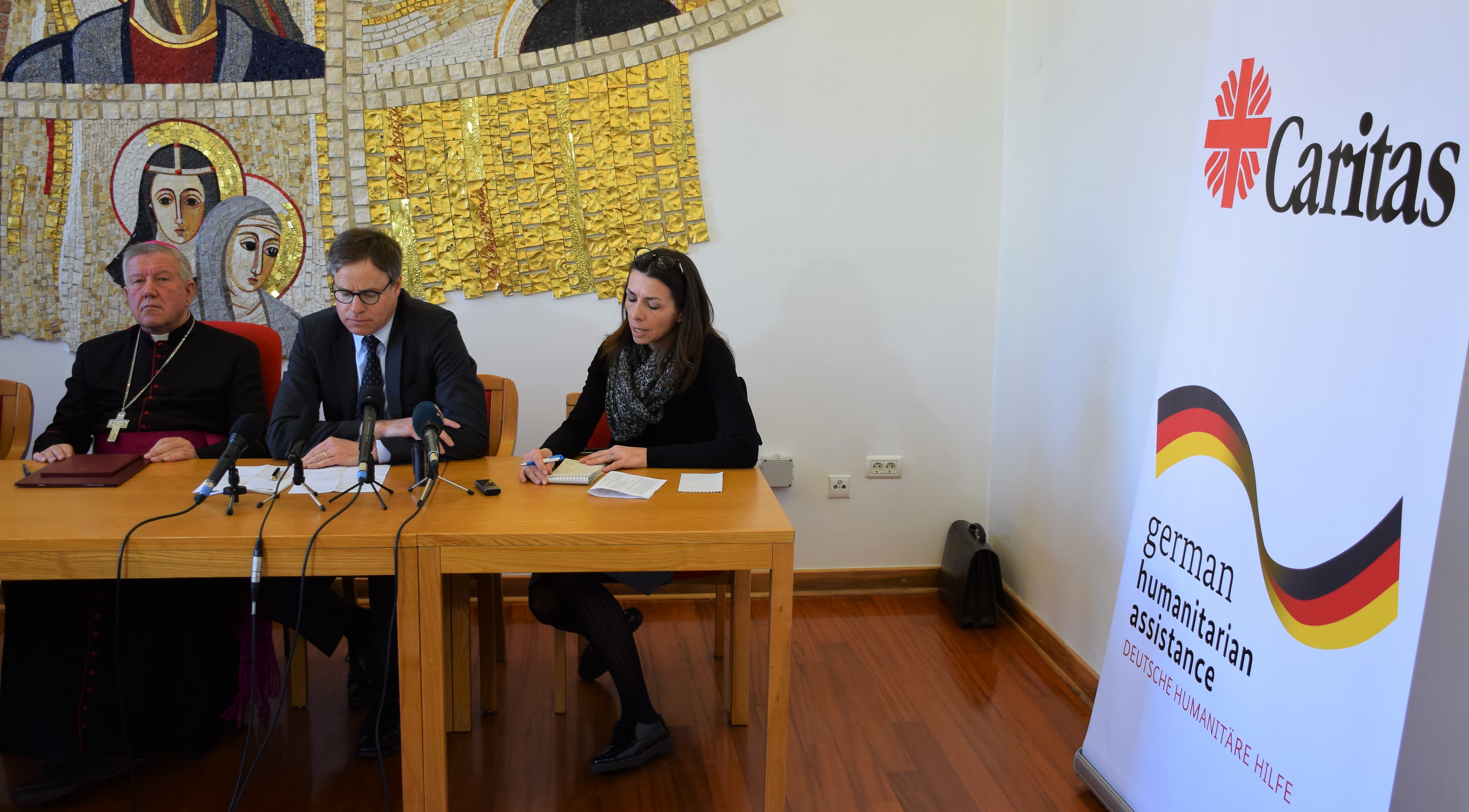