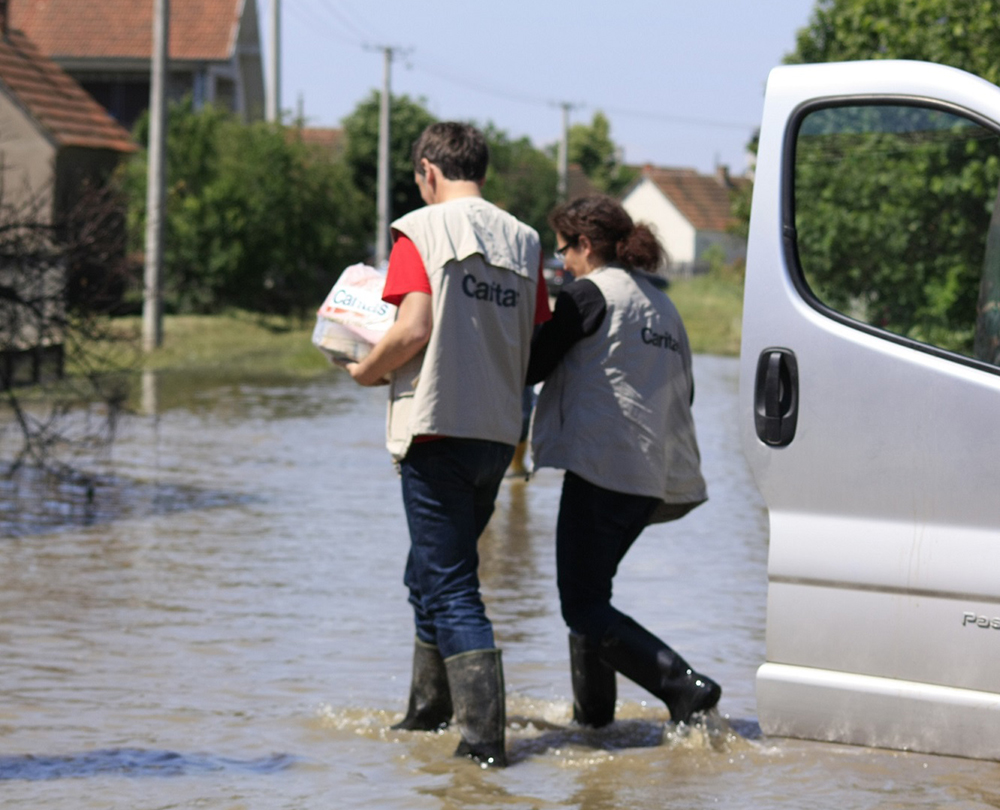 Caritas Serbia began its operations through providing humanitarian aid in situations of crisis: during the time of embargo and conflicts on the territory of former Yugoslavia, it helped refugees from Croatia and Bosnia and Herzegovina, internally displaced persons from Kosovo, as well as the local population in need. It is estimated that over 2 million people have been assisted in different ways by the year 2000. Apart from individual beneficiaries, the aid was also provided to many social and health institutions, over 250 of them.

However, even in the years to follow, Caritas has carried out emergency activities in the event of floods, landslides and other disasters. Thus, in 2005 and 2006, an aid program was implemented for assisting the flooded area in and around Jaša Tomić, in the northeast of Serbia. In May 2014, Caritas initiated a major emergency action to help people affected by the floods and landslides in Serbia. The flood relief included several stages and lasted over a year. In September 2015, Caritas launched an urgent project to help refugees from the Middle East who have been passing through Serbia on their way to EU countries. This project is still ongoing and is reflected in the distribution of warm meals, hygiene items, laundry services, and in providing psycho-social assistance.

Support for young Roma women and men in employment

One of the priority goals of the YourJob project is the empowerment of young members of national minorities and vulnerable categories of the population. Roma are one of the most difficult to employ categories in [...]

Donation to KBC “Zvezdara” worth over 27,000 euros

In the spirit of solidarity and its mission, Caritas Serbia has joined in the fight against the COVID-19 virus pandemic, providing support to the health system of the Republic of Serbia. On November 23, in [...]

Outdoor games for children in Bujanovac Reception Center for Refugees

Due to the rainy weather, the Caritas team in Bujanovac uses the sunny weather period for organizing games for children in the open. Playgrounds are organized in front of the center building, where children have [...]

The Caritas classroom in the Bujanovac Reception Center is also used for supplementary classes for school children. Mathematics is one of the most important school subjects, which is why the Caritas team organizes special [...]

Occupational and creative activities in the Asylum center Krnjača

In addition to the language lessons, Caritas organizes also animation activities for children and adults at the Krnjača Asylum Center. During these activities, refugees and migrants make decorations, jewelry and play social games. The [...]